The Apple Watch 4 is undeniably one of the best smartwatches ever made. But Apple’s competitors have stepped up their game since the first generation of the Apple Watch was released in 2015, and recommending Apple’s latest lifestyle gadget is not as easy as it once used to be.

At A Glance: Apple Watch 4 vs Fitbit Ionic Best Smartwatch 2020

Apple’s main competitor in the smartwatch market is Fitbit, whose products have always been heavily fitness-oriented. In particular, the Fitbit Ionic is a very compelling smartwatch with an affordable price and exceptionally long battery life, making it an excellent alternative to the Apple Watch 4.

We’ve put the two smartwatches to the test in their own Apple Watch vs. Fitbit competition to see which is worthy of your money, and here’s what we found out. 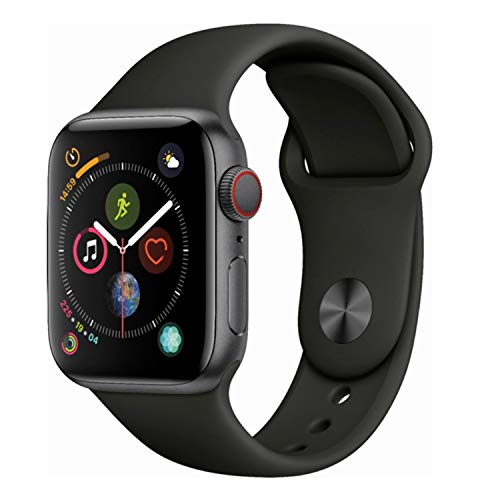 Watches have always been about design, not just function. Smartwatches are no different in this regard, and both Apple and Fitbit know it. While Apple has gone for rounded edges and elegant curves, Fitbit has opted for a sportier look, with sharp angles and a slim profile.

We’re not here to give subjective judgments about design. Still, in the Apple Watch vs. Fitbit competition, we can subjectively say that the Fitbit Ionic feels more durable than the Apple Watch 4. Both smartwatches are waterproof up to 50 meters, but we don’t believe that the Apple Watch 4 could survive a nasty fall with just a few scratches. For that, you might need to upgrade to the heavier duty stainless steel option, because of the aluminum model scratches and scuffs like crazy.

Its slightly protruding rounded glass would probably be the first to meet the concrete, and the two wouldn’t get along well.

Both displays are sharp and easily readable even under direct sunlight, but the Apple Watch 4 is more eye-catching because its display stretches from edge to edge.

What’s arguably much more important than a few extra pixels or millimeters of screen real estate is battery life. The Apple Watch 4 lasts much longer on a charge than its prior generations, but you can still expect at most 2 days before it runs out of juice. However, your mileage varies widely, depending on what you’re doing with it. It’s not clear that you can get a full two days off of a single charge.

The Fitbit Ionic is in a league of its own. It consistently manages up to 5 days without charging, so you don’t have to carry yet another proprietary charger with you if you travel a lot. You can count on the Fitbit Ionic to make it on a single charge. This makes it the perfect choice for those that need to monitor something like sleep tracking.

If you want a smartwatch because you’re tired of reaching into your pockets to grab your smartphone all the time, the Apple Watch 4 is an excellent choice, especially if Apple makes your smartphone. It has Bluetooth 5.0, cellular options, support for Siri, and works flawlessly with recent versions of iOS.

Of course, the Fitbit Ionic has all the basic smartwatch features as well, but it’s bread and butter, or squat and bench press, is fitness tracking. Thanks to its exceptionally long battery life, you can use it during the day to track your activity and then seamlessly transition to sleep tracking at night. Later this year, Fitbit should roll out its sleep apnea alert system, and its dashboard app can already break down your sleep into different stages.

One feature found on the Apple Watch 4 that the Fitbit Ionic doesn’t have is ECG monitoring. A highly accurate ECG sensor inside the smartwatch monitors your heart rate and lets you know if it detects something of concern, providing you with a sense of security so you can give your workouts everything you have. At the moment, we don’t know whether Fitbit is exploring the addition of an ECG sensor in future Fitbit products.

This ECG sensor has been out and has known to spot heart problems before people fall into a full-blown heart attack.

One of the cool things about the Apple Watch 4 is its fall tracking. It’s great to take with you on a run or jog because if you take a hard fall, the Apple Watch 4 can automatically call emergency services for you. You, of course, have the option to stop the call before the Apple Watch makes it, however.

You can often find the gadget on Amazon and other websites for less than the listed price, especially the older it gets. Compare this with the Apple Watch 4, which costs even more if you choose the cellular version, which requires a data plan on top of that. The Apple Watch 4 price stays pretty steady, as most Apple products tend to do.

If you’re already heavily invested in Apple’s ecosystem, you’re probably used to paying premium prices to enjoy flawless compatibility. Still, people who are not will find it much harder to justify the price Apple is charging for its smartwatch.

Apple has carved its niche in the global market. Its products, including the Apple Watch 4, are selling as well as ever. But competitors such as Fitbit show that excellent design, build quality, and features don’t have to come with an eye-watering price tag. So in the Apple Watch vs. Fitbit completion, the Apple Watch 4 makes a lot of sense for die-hard Apple fans who already own multiple Apple products. Everyone else should seriously consider the Fitbit Ionic as a compelling, fitness-oriented alternative.