iPads are phenomenal devices, allowing you to take a computer with you anywhere you go, mainly. However, with so many different iPad versions out there to choose from, which one do you decide to buy? What the difference between, say, an iPad and an iPad Mini? Or an iPad and an iPad Pro?

The differences are pretty low key, keeping the iPad and iPad Pro essentially the same. Still, the new technology in the iPad Pro is a big enough difference that it can add hundreds of dollars to your purchase.

So if you’re not sure as to what iPad to pick up, be sure to follow along with us below. We’ll show you the big differences between the iPad and the all-new iPad Pro.

Difference Between iPad and iPad Pro

If this co-motion processor weren’t there, you wouldn’t be able to use the Apple Pencil with the new iPad Pro. However, Apple is putting the co-motion processor in its regular iPad models as well, further blurring the lines between the iPad Pro and the iPad.

The other significant change with the iPad Pro is that you can get it in larger screen size. Most variations of the iPad are 10-inches or smaller, but the iPad Pro can be had in 11-inch and 12.9-inch sizes, giving you even more real estate to use.

The screen is the most significant difference. Not only is it more substantial, but it provides sharper screen clarity than the standard iPad, and comes with a larger color gamut, which is vital for design work.

The all-new iPad Pros are taking on a design change that is similar to the iPhone X. With any new iPad Pro model, you get an all-screen design. So not only do you get a more prominent display, but you also get even more screen because the large bezel is virtually gone here.

Apple, with the iPad Pro, is essentially trying to pitch it as a portable computer. It’s more powerful than many laptops out there, and with a keyboard accessory, you could quickly turn it into a laptop and a tablet when needed. With this latest model, you can choose to get up to 1TB of storage, and can even equip your iPad Pro with cellular connectivity.

One of the most helpful things about the iPad Pro is that Apple is trying to transform it into a portable computer, with iPad OS now on-board. One of the most important upgrades is called “Slide Over” and another called “Split View.” These work by allowing you to have multiple apps open on the iPad, which makes this more like a laptop, and makes you way more productive.

iPadOS also enables you to have widgets right on the home screen now, which is another significant change. And depending on the widgets that you plan to use, the iPad Pro’s detailed screen will make them pop.

There are a number of features that iPad OS has brought, which you can all see here, but ultimately, the iPad Pro has become much more like a laptop than it has a tablet. 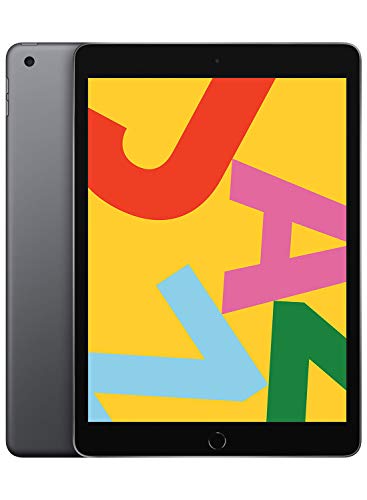 And then there’s Apple’s traditional iPad model. This one only comes in a 10.2.-inch display, so you’re somewhat limited as far as screen choices go. On top of that, it isn’t an all-screen design, which means the bezels take up a large part of your screen space.

Apple’s regular iPad now has a co-motion processor in it, which means you can use the Apple Pencil with it. This is a new change in the iPad, as Apple tries to bring its whole iPad lineup into line with each other. It has a powerful A10 processor, which means you can easily do things like 4K video editing, watch 4K movies, play graphic-intensive games, and more.

The iPad is also a little more portable than the iPad Pro. Apple packs a lot of power into its iPad Pro models, which makes them a little weightier than many tablets. That said, the traditional iPad is thin and weighs a meager pound. That makes it easy to take with you almost anywhere without it being too cumbersome.

Lastly, the iPad has a massive battery that should give you an all-day battery life with regular use. If you don’t regularly use it, this iPad can last you days at a time before needing a new charge. The other small change is that you cannot get the traditional iPad in 512GB or 1TB storage options — you’re limited to 128GB and 256GB.

When it comes down to it, the iPad is more of a layman’s tablet than the iPad Pro. It’s for your regular social media browsing, any media that you want to watch, and even games. The iPad Pro is more geared towards work, giving you plenty of space to draw, manipulate spreadsheets, and more. It has a large amount of space, which makes it ideal for multi-window applications and the like, too.

As you can see, there’s a bunch of small differences between the iPad and the iPad Pro, with the most significant difference being the change in screen sizes. Of course, these differences make up hundreds of dollars, so you’ll keep more money in your pocket by going with the traditional iPad.

iPadOS is also available for the regular iPad. Still, the iPad Pro is more able to keep up with the added demand for the additional applications that you’ll be using.

So, which iPad should you pick up? The difference between iPad and iPad Pro is very slim, but when it comes down to it, it all depends on what your needs are, indeed. If you need that sort of power, the iPad Pro won’t let you down; however, if you need an iPad for casual use, the traditional iPad model will serve you well enough.

You won’t run into power issues with either device, as they’re both more powerful than many laptops out there. And you can easily turn them into laptops with a keyboard accessory, and especially with the new iPad OS on-board.