iPhone’s speaker and microphone get the job done when it comes to calling, Skyping, and basic voice recording, but they are not suited for conference calls. The tiny internal speaker isn’t nearly loud enough for a room full of people, and the microphone doesn’t even pick up sounds coming from several different directions. That’s where Bluetooth speakerphones come in. They connect just like Bluetooth headphones, instantly turning any iPhone into the central brain of any conference room.

Not sure what the best choice is for the iPhone? If you follow along below, we’ll show you seven of the best that all connect up to the device without hassle. So without further ado, here they are: 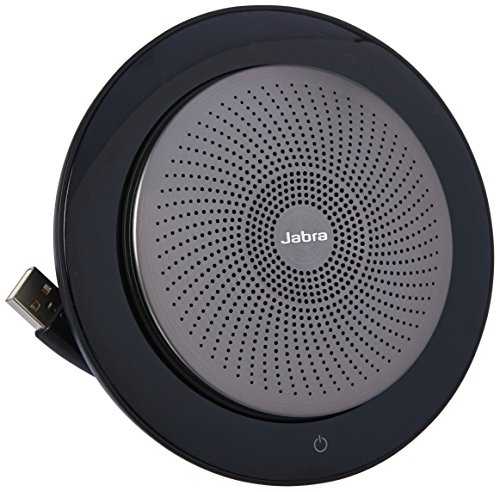 If you’re looking for a premium Bluetooth Speakerphones for Conference that you can use for your conference calls, look no further than the Jabra Speak 710. Hook this one up over Bluetooth, and not only will you make conference easier to manage, but you’ll be able to hear them better, too.

Jabra says they’ve equipped this with immersive sound for calls and music alike. Not only that, but it comes with an Omni-directional microphone and HD voice, which helps your voice stay clear on the listener’s end, too.

One of the cool things about this option is that it comes equipped with 15 hours of battery life, so you don’t have to worry about it dying on you mid-call. It’s lightweight as well, making it easy to travel with, too.

The Jabra Speaker 710 also has coverage for up to 6 people, which can be ideal for multiple people that need to talk over this speakerphone. 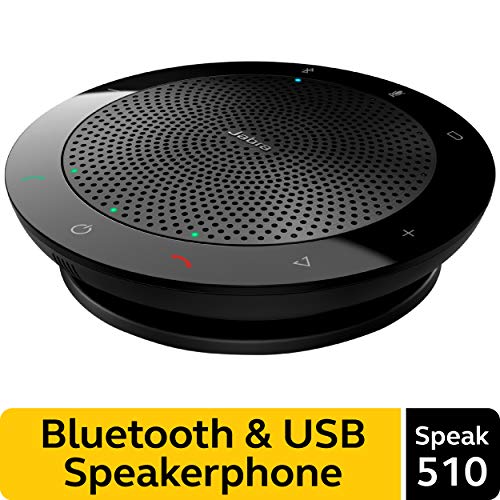 Jabra, a subsidiary of GN Netcom and a manufacturer of wireless and corded headsets for mobile phone users and office-based users, has plenty of experience with Bluetooth listening and recording devices. Their sports-oriented Bluetooth headphones are featured on many top 10 lists, and their conference speakers can be found in the center of meeting rooms of countless Fortune 1000 companies.

What makes the Jabra Speak 510 Bluetooth speaker so remarkable is its compact size. If you’re someone who is always on the goal, holding a meeting at coffee shops and poorly set up conference rooms, being able to always have at hand a high-fidelity wireless speaker with a 360-degree built-in microphone is a real game-changer.

It takes just seconds to set up a conference call via Bluetooth and USB connection, and you can keep talking for as long as you want because the Speak 510 from Jabra lasts up to 15 hours on a single charge. As any proper speakerphone for conference calls should, the Jabra Speak 510 is compatible with all unified communications platforms, such as Microsoft Lync and Microsoft Office Communicator. 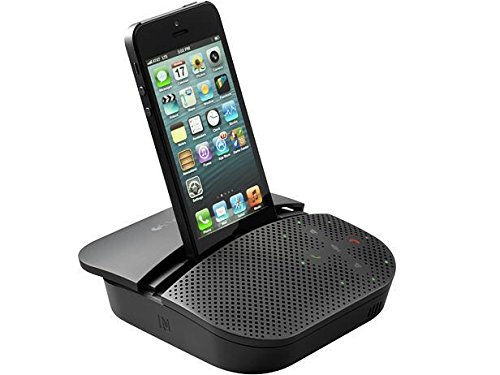 Everyone who is often on the phone deserves to have the Logitech P710e on the desk. This high-end speakerphone doubles as an iPhone stand, allowing you to pair your device using NFC pairing instantly. With some creativity and the right iPhone apps, you can turn your smartphone into a calendar, personal organizer, rolling news feed, and more. Once paired, you can enjoy the DSP technology for precise mic tuning and life-like conversations.

The P710e is controlled using intuitive touch gestures, and you can bet that this speakerphone has hardly anything in common with those substantial clunky speakerphones from the 90s. Unlike with them, you won’t have to read a lengthy manual to understand how to use it.

Additional devices can be paired with one button or via NFC. Even if you happen to be far from an electrical outlet, the Logitech P710e will help you stay productive thanks to the large built-in battery that lasts up to 15 hours on a single charge. 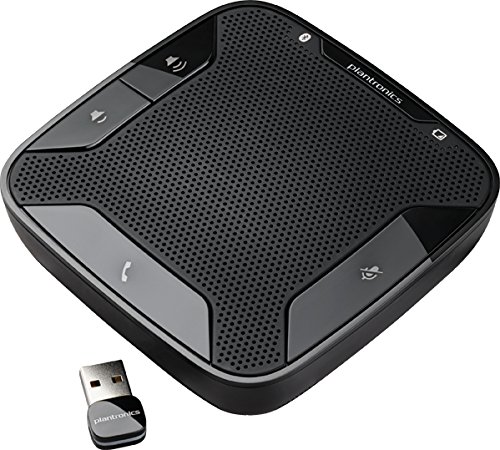 The Plantronics 86700 is significantly different than the Jabra Speaker 710. It comes in a square profile, so while it doesn’t look super appealing, it does function well.

Still, Plantronics has equipped this speakerphone with an easy to use interface for your calls — there are buttons for answer/end, mute, and volume on PCs, smartphones, and tablets.

It easily connects up over Bluetooth, but do keep in mind that it only lasts seven hours on battery. That’s longer than most call meetings will last, so you don’t have to worry about the speakerphone dying mid-meeting.

Naturally, it comes with a few bi-directional microphones, which are designed to activate in the direction of the speaker’s voice. And with 360-degree room coverage, you’ll be able to allow multiple participants in the room to speak easily. 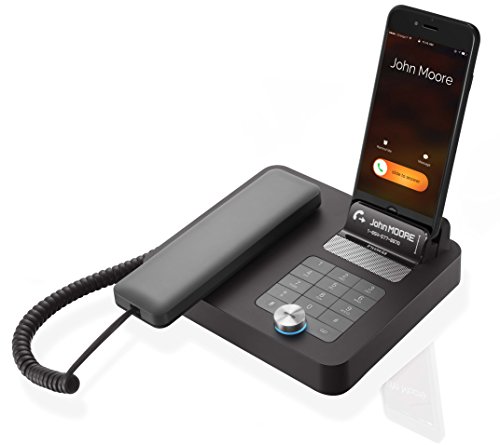 The previous two speakerphones on this list focus primarily on portability, the NVX 200 from Invoxia. This is a manufacturer of smart office phones that communicate with smartphones and hybrid consumer IP Phone and wireless speakers, wants to capture the attention of people who spend the most time in a single office, talking with clients and coworkers on the phone.

This giant speakerphone features a proper dial pad, a smartphone stand, and a handset. It uses Invoxia InVivo patented technology, which cancels microphone noise and room reverberation, offering crystal clear and convincing sound to your conference calls. The NVX 200 also comes with several beam-forming microphones that focus on the talker to pick up only their voice.

The integrated LCD, together with a convenient wheel makes it easy to quickly dial contacts from a list of up to 10 quick dials for most frequently used contacts. The docking station doubles as a smartphone charger. You can charge not only your iPhone but also any Micro-USB Android or Windows Phone smartphone. But what’s perhaps most praise-worthy about this headset is its design, which has earned Invoxia two design prizes. 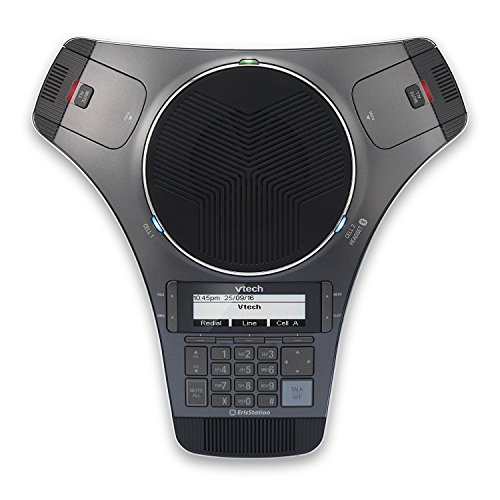 If you want to get serious and surprise the people you talk to over the phone with fantastic voice quality, the VTech VCS752 ErisStation won’t disappoint you. This professional conference phone features two microphones with 360-degree reception, 12 hours of talk time, Bluetooth connectivity, and support for up to three SIP lines.

You can expect the sound quality to be on par, if not better, than similarly priced conference phones from Polycom, an American multinational corporation that develops video, voice, and content collaboration and communication technology.

The setup procedure is quite simple, and the included manual explains everything in great detail. Just keep in mind that this phone requires you to always dial the full area code—even for local numbers. While slightly unusual, it’s only a small price to pay for the exceptional sound quality and the plethora of advanced features this conference phone offers. 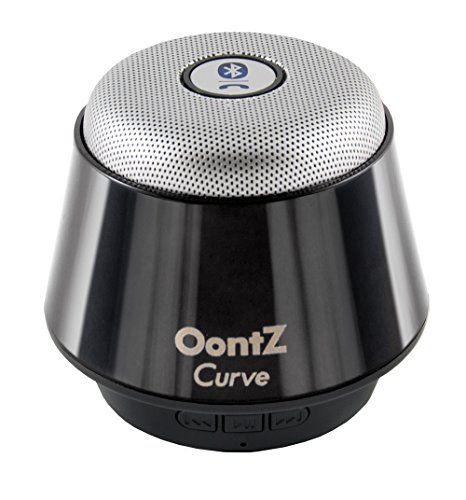 Cambridge SoundWorks, Massachusetts-based consumer audio equipment manufacturer founded in 1988 by Henry Kloss, also designs speakerphones. The Curve uses much of the same technology that can be found inside such legendary speakers and surround sets, as the FPS2000, making it compact yet decidedly high-fidelity.

The high-gloss metal body gives the speaker a premium look. It significantly increases its durability, allowing you to take it with you everywhere you go without having to purchase a bulky case. You can connect your iPhone either wirelessly via Bluetooth or using the included 3.5mm audio cable.

A single battery charge will give you up to 3 hours of talk time, and it doesn’t take long to recharge the speakerphone to its maximum capacity—even using a power bank.  For something so small, the sound quality is surprisingly great, and so is the built-in microphone.

As you can see, you have a large variety of Bluetooth speakerphones for the iPhone that you can choose from. Most of these will accomplish the means that you’re after, but the Jabra Speak 710 is easily the best one that you can pick up today.