Let’s face it, iPhone photography is not limited to just taking pictures or selfies. Apple has significantly upgraded the video recording capabilities with each iPhone upgrade, and the latest iPhone 12 is no different. As you would expect, there are plenty of smartphone gimbals for iPhone 12 out in the market right now. This is why it makes sense to go through every available option so that you ultimately get the right product

So how do you make the best out of your iPhone 12 or iPhone 12 Pro’s video recording capabilities? Well, there’s a high degree of stabilization built into the iPhone camera, though it still may not be enough for you to get complete control over your videos.

This is where gimbals, otherwise known as a stabilizer, come into the equation. These basically allow you to capture shake-free and cinematic videos with a small attachment. While traditional gimbals were slightly bigger in size, manufacturers have now offered smaller and more powerful offerings to choose from.

Simply put, gimbal stabilizers can significantly enhance your video capturing abilities whether it’s for birthday parties/events, or for recording a soccer game. Content creators and videographers vouch for the effectiveness of gimbals, which makes it a must-have accessory for budding video content creators.

We’ve made that job easier for you with this article as we talk about some of the best gimbals for iPhone 12 stabilizers you can get. What’s even better is that some of these smartphone gimbals are also compatible with DSLRs and other professional cameras, though this isn’t a guaranteed feature.

With this in mind, let’s have a look at some of the best video stabilizers/gimbals for iPhone 12 that you can buy. 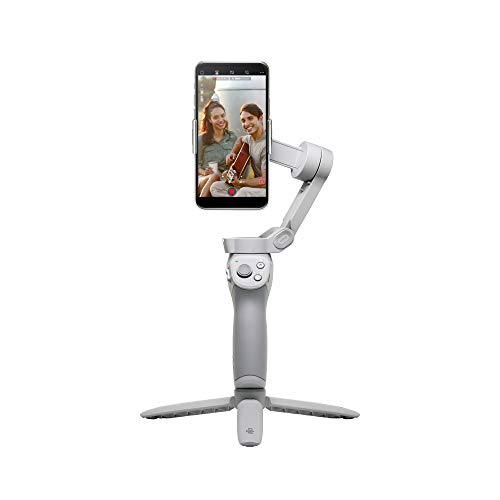 This is an excellent 3-axis stabilizer for your iPhone, including the budget ranged iPhone SE 2. The company mentions that the OM 4 supports high-quality recording even if your phone has an additional lens attachment, something that a lot of gimbals cannot do. As with other popular DJI gimbals, the OM 4 is accompanied by a few buttons to help you pan and tilt the phone whilst recording.

Given that this is one of DJI’s newest smartphone gimbals, the manufacturer has included a decent bunch of new features including gesture control. The stabilizer is also built-in with DJI’s ActiveTrack 3.0 technology, allowing you to seamlessly track all subjects in the camera’s view.

As you would expect, the company is also including a bunch of clever camera effects including something known as the “Hitchcock effect”, which is a creative zoom feature to add more cinematic action to your recordings. The OM 4 will require users to download the DJI Mimo app on their iPhones, which is a free download on the App Store. This app will allow users to control almost every aspect of recording videos including post-processing.

The company mentions that the OM 4 can provide up to 15 hours of battery life on a single charge, though this will depend heavily on your usage and frequency.

Undoubtedly one of the most popular gimbals out there, the Zhiyun Smooth 4. It has a robust design and a tripod-like design, allowing you to keep it upright on the ground when not in use. The Smooth 4 a wide range of buttons on the gimbal itself, allowing you to switch modes or other attributes while shooting the video. Available buttons include toggles for modes like Vertigo Shot, POV Orbital Shot, “Roll-angle time-lapse, and others.

The Zhiyun Smooth 4 is a 3-axis handheld gimbal and is compatible with apps like Filmic Pro as well as HY Play. Both apps are available as a free download on the Google Play Store and iTunes App Store. The Zhiyun Smooth 4 also comes with object tracking onboard which is a necessary feature for any filmmaker. The Smooth 4 offers comes with a twelve-hour battery life.

In addition to using the Zhiyun Smooth 4 as a stabilizer, customers can also switch this to a power bank thanks to support for two-way charging. To make things easier on the users, the manufacturer also offers a battery indicator on the device. It uses a standard USB C port to charge while there’s also a dedicated full-sized USB port for phone charging. If you’re looking for a smartphone gimbal stabilizer that serves as an excellent alternative to some of the more expensive variants, the Zhiyun Smooth 4 is your best bet.

It’s hard to talk about modern-day gimbals and miss out on the DJI Osmo Mobile 3. Though the manufacturer has released multiple upgraded offerings since then, the Osmo Mobile 3 remains the best option for many, mainly due to its cost and feature set. DJI equips this device with brushless motors to eliminate all camera movements while recording. It also offers a nifty object tracking feature.

Moreover, the DJI Osmo Mobile 3 comes with built-in shooting modes like Gesture Control, Dolly Zoom, Panoramas, Slow Motion, Time lapse, Hyperlapse, Sport Mode, Handy Convenience, and Story Mode, covering all the bases for content creators. We also like the fact that the Osmo Mobile 3 comes with minimal buttons which make shooting movies a whole lot easier. There are dedicated buttons for panning and recording on/off, while the company has also crammed in a battery indicator there.

Speaking of battery, the DJI Osmo Mobile 3 can last for up to 15 hours on a single charge, which is more than most contemporary gimbals available today. The Osmo Mobile 3 is built for portability and has a completely foldable body, making it easy to carry it in your backpack. This and a variety of factors make the DJI Osmo Mobile 3 one of the best gimbal out there. 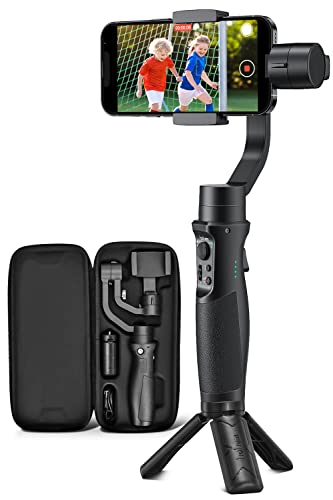 Another Hohem Product on our list is the Hohem Gimbal Stabilizer. This is one of the best Nimbals among third party-offerings, and we highly recommend it thanks to the features it’s packing underneath. We also like the fact that it comes with its own tripod. The company mentions that this three-axis stabilizer offers a battery life of up to 13 hours, which puts this among the likes of the DJI stabilizer we discussed above.

As you would expect, the three axis stabilization makes sure your videos are never shaky, even during movement. Further, customers can expect features like Dolly Zoom, Inception Mode, Action Mode, panoramic video, cloneMe and Fantastic Rotation. Thanks to the built in tripod, this is also an excellent stabilizer for time lapse videos.

Users will have to download the Hohem Joy app from their mobile app stores to pair this gimbal with the phone. The manufacturer offers this stabilizer with a carrying case as well as a USB cable for charging, though no adapter is provided. 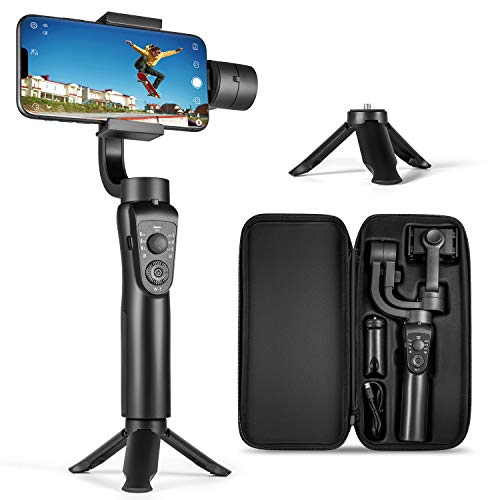 This is one of those rare gimbals for iPhone 12 that also offers a tripod stand, while most manufacturers offer it as an add-on. The Aoni Gimbal comes with a 3-axis stabilization system that helps cancel out all unnecessary movements from your film. This aspect allows the stabilizer to capture footage of motion such as cycling, running, and so on without breaking a sweat.

The Aoni Gimbal is compatible with the Gimbal Pro app which can be downloaded from iOS or Android app hubs. In terms of design, the two-way clip allows you to seamlessly switch your iPhone from horizontal to vertical shooting mode, and vice versa. It comes built-in with features like face tracking, 3D Inception, and a wide-range of Beauty filters to stylize your videos.

As with other gimbals, users will find a couple of controls here allowing you to pan or zoom whilst shooting videos. The company mentions that the Aoni Gimbal can run for up to twelve hours on a single charge. While this isn’t the best battery life on a gimbal stabilizer, it is on par with most third-party gimbals we’ve discussed today. In addition to working with larger iPhones, this stabilizer will also work with smaller phones like the iPhone SE, putting this among the best gimbals out there. 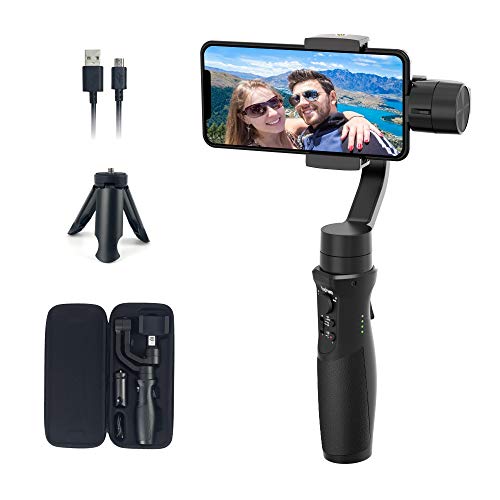 This is an elegantly designed gimbal stabilizer for your smartphone with features like 3-axis stabilization built-in. It has a robust body but only weighs 280 grams, making it well suited for practically any smartphone out there. It does an excellent job of canceling out the vibrations or shaking whilst recording, thus allowing you to capture truly cinematic photos.

This phone gimbal also has the ability to track and faces within the camera’s periphery which is a necessary feature while shooting longer videos. To make sure the iSteady Mobile Plus is wirelessly connected to your smartphone, you will also need to pair it with the Hohem Gimbal app which is a free download on app hubs. This phone gimbal has a battery life of twelve hours thanks to the 3,600 mAh battery underneath. This can also be used as a power bank to charge your phone.

The company mentions the inclusion of an upgraded Sports Mode which allows the motors to react quickly to your changing movements. There are a few handy physical controls on the gimbal while the manufacturer offers a battery indicator as well. It’s worth noting that the Hohem iSteady Mobile Plus is offered with a decent carrying case, allowing you to take this wherever you go. 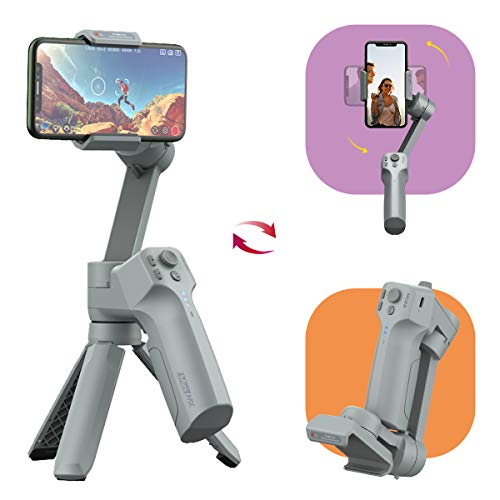 The Moza Mini MX is your best bet if you’re looking to bring high-quality recording capabilities to your smartphone. It comes with a flexible design, which in turn makes it extremely portable. There’s a tripod included here as well. To make things less complex for the users, the Moza Mini MX comes with only a few buttons on the device, avoiding the trouble of accidentally pressing buttons while recording.

This stabilizer can reportedly take a maximum payload of 280 grams, which effectively means that it covers a wide range of devices, including the iPhone 11 Pro, iPhone SE, and others. The company mentions that this stabilizer will need to be paired with your phone using the MOZA Genie app. It’s also worth noting that once set up, the gimbal may take some time to adjust itself to the orientation of the phone.

As far as battery life is concerned, this stabilizer can run for up to 20 hours on a single charge, which is the best battery life among any gimbals we’ve discussed so far. Be sure to have a closer look at this offering. 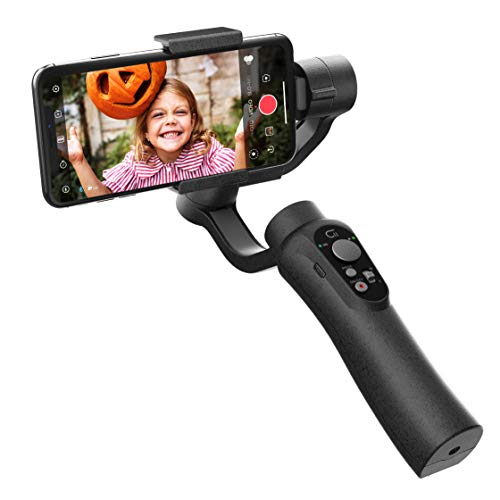 This is an excellent alternative to the DJI gimbal we mentioned above and comes with pretty much the same hardware. It has the usual set of gimbal controls while the manufacturer supports the ZY Play app to pair your phone with the smartphone gimbal. Thanks to 3-axis stabilization, any and all videos you capture will be shake-free.

The gimbal also brings in features like Dolly Zoom, Object Tracking, and more, giving budding filmmakers an excellent platform to capture subjects. It comes with four dedicated gimbal modes such as Pan, Lock, Follow, and POV, thus offering something for everyone. Users will also find excellent motion sensing features built-into this handheld gimbal.

As for the weight it can carry, the manufacturer mentions that this can accommodate phones of up to 200 grams, which pretty much covers every iPhone in existence right now including the iPhone SE or the iPhone 11 Pro. The Cinepeer C11 can run for up to twelve hours on a single charge, thanks to the 4,000 mAh battery underneath. What’s even better is that customers can use the Cinepeer C11 as a power bank to juice up their phones or other devices.

The aforementioned ZY Play app is a free download on the iTunes App Store as well as the Google Play Store for Android. Overall, the Cinepeer C11 is an excellent smartphone gimbal for vlogging or simply recording your day in the park. Be sure to have a closer look.