In the AirPods vs Beats Powerbeats 4 comparison, it’s clear that there can only be one winner. We pick the PowerBeats 4 thanks to its impressive battery life, excellent audio quality, and the convenience of charging via a traditional charging cable, Lightning in this case.

The Apple AirPods have pretty much revolutionized Bluetooth earbuds, though there have been several available in the market prior to that. What the company managed to do well was the design, while the charging case helps keep the earbuds juiced up for long. On the other hand, Apple also owns Beats, which unveiled the Powerbeats 4 earlier this year with widespread praise.

So does this mean either have an advantage over the other? Absolutely. However, it’s not as transparent as it may seem. Given that Apple has worked closely with Beats since the acquisition, the new Powerbeats 4 shares some features with the AirPods, including the H1 chip that we will go into detail below. Keeping this in mind, this is certainly going to be an interesting comparison.

Though Apple’s AirPods Pro is technically the newer model among the AirPods, we’re going to discuss the standard AirPods here that comes with a wireless charging case. This is equally popular as the AirPods Pro, primarily because it is somewhat cheaper.

So taking these factors into account, let’s take a look at how the AirPods fares against the Powerbeats 4.

Apple’s AirPods has remained relatively unchanged over the past few iterations. This is because the design of the original AirPods has worked perfectly for the company, making it one of the most popular wireless earbuds of our time.

Since these are completely wireless, there are practically no wires present here. This also means that it’s easy to lose if you’re not careful enough. The ear tips are slightly elongated which ensures that they’re not too small. Users can also interact with the AirPods by tapping on them. Controls can be configured to either activate voice assistants (Siri) or pause/play audio tracks on the AirPods.

When the AirPods first came to the picture, it was marketed as a true wireless earbuds, perhaps as a wireless alternative to the company’s EarPods that are provided by default with iPhones. This also made sense given that Apple ditched the 3.5mm headphone jack from its iPhones, making wireless earbuds the need of the hour.

The AirPods model that is sold today is fairly indistinguishable from the original model. This is mainly because Apple has included some new internal hardware features, primarily the Apple H1 chip which enables features like always-on “Hey Siri” hands-free while it can also help with prolonging battery life, which we will speak about in a while.

Since this is an Apple product, it’s not really a surprise that compatibility is somewhat limited with non-Apple devices. This means that you will experience the full suite of features of the AirPods, only if you own an iPhone, Mac, or any other compatible iOS/iPadOS device. While the AirPods will pair and work with Android devices, the process and experience won’t be as simple.

For example, iPhone users will find that setting up a new pair of AirPods will take not more than a few seconds once you’ve unboxed the earbuds. Once paired, the AirPods will automatically connect to your devices each time you remove it from the charging case. This saves the trouble of having to manually go to the Settings and connect paired earbuds every single time (we’ve all been there at some point).

It’s also worth mentioning that the AirPods lacks active noise cancellation or ANC, which is a feature available on the more expensive, AirPods Pro model. This is primarily because the standard AirPods lack ear tips that act as a barrier for external noise.

This also brings us to one of the AirPods’ key features – the ability to always know what’s happening in the background. This is a double-edged sword, however, meaning that you can’t really have an undistracted music listening session.

This is an area where the AirPods has come a long way since its inception. Apple has made incremental upgrades to the battery life with each passing upgrade, and this has led to the current-gen AirPods sporting an impressive 25 hours of playback time with the provided wireless charging case. However, Apple specifies that the AirPods can only last for up to 5 hours at a time which is when they have to be popped back into the charging case.

Talktime is rated at 3 hours per charge on the wireless charging case. So you get a total of five charges over a 25 hour period, which is pretty decent. Though the number may fall significantly if you’re constantly using the AirPods for voice calls.

As for the charging case, it can be charged over a Lightning cable (provided with the AirPods) or wirelessly by simply placing it on a Qi-compatible charging mat. It’s a great technology overall that brings convenience to the table. Though if you’re in a hurry, you’d much rather be using whatever Lightning cable and adapter that’s lying around to juice up the AirPods charging case. There’s an LED indicator on the case as well that can tell you the status of the battery. 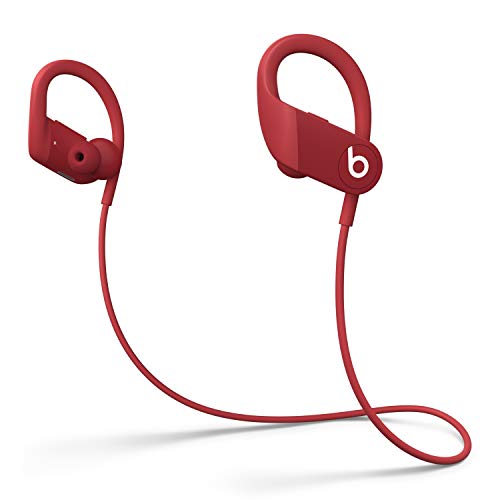 The Powerbeats 4 has evolved a great deal since Beats first announced the Powerbeats earbuds. One of the key distinctions between the Powerbeats 4 and the AirPods is that the former comes with a wire to hold the two earbuds together, so these are not true wireless earbuds.

The earbuds are quite bulky at first glance, though it doesn’t take much time to get used to it. The wire rests on the back of your neck to ensure a smooth and seamless connection between the two earbuds. Beats also provides multiple additional eartips to make sure it fits every ear size comfortably. In traditional Beats fashion, customers also get a carrying pouch for these earbuds.

Given that the two wireless earbuds look completely different, it’s understandable if you assume that the Powerbeats 4 has totally different hardware underneath. Well, that’s not entirely true. Though noise isolation is much better on the Powerbeats 4 thanks to the additional ear tips offered by the manufacturer, these earbuds also come with the Apple H1 chip that we see on the AirPods.

Thanks to this chip inside, the Powerbeats 4 can perform all the tasks that the AirPods can, including the ability to have always-on “Hey Siri”, though it can be turned off on your iPhone. As far as compatibility with other devices is concerned, the Powerbeats 4 will no doubt appeal to a larger section of the audience thanks to the Beats brand’s wide appeal over the past several years.

These earbuds naturally work with any Bluetooth device, and the manufacturer mentions the inclusion of Class 1 Bluetooth for low-latency audio performance. As we’ve pointed out above, the Powerbeats 4 has better isolation, though Beats hasn’t included active noise cancellation hardware underneath. This is a feature that’s missing even from the company’s Powerbeats Pro.

Sound quality is absolutely crisp with the Powerbeats 4, and there’s very little audio leaking even when you’re listening to music at relatively higher volumes. This, again, is thanks to the ear tips that act as a decent sound isolation barrier.

In fact, thanks to this aspect, we rate the sound quality of the Powerbeats 4 to be significantly better than the AirPods. Customers will also notice better bass performance (in line with Beats headphones of the past) on the Powerbeats 4.

The company mentions that the Powerbeats 4 can offer 15 hours of battery life on a single charge. While this may not seem all too impressive, we have to consider the fact that this is three times more than the AirPods can run without needing to be charged. Speaking of charging, the Powerbeats 4 uses a conventional charging setup with a Lightning port on one end of the in-ear headphones.

So even though there are no fancy charging cases with the Powerbeats 4, it does offer impressive battery life on its own. One can argue that this is a more convenient setup for many customers given that you don’t have to pop back the headphones into an accessory. If you happen to be an iPhone user, a Lightning cable is always around, so charging it up shouldn’t be a major inconvenience for the users.

As you can probably guess at this point, the two headphones serve completely different niches. This means that while the AirPods may appeal to some, the Powerbeats 4 will be the more favorable choice for a few others. But if we look at this strictly from the perspective of features and performance, it goes without saying that the Powerbeats 4 is the winner here, primarily because of the longer battery life on a single charge, as well as the sound quality aided by the conventional in-ear design.

The AirPods has no real advantage in addition to being extremely convenient to wear and remove, thanks to there being absolutely no external wires on board. Thanks to the H1 chip, pairing is just as easy on the Powerbeats 4 as it is on the AirPods.

Other alternatives worth considering

If you’re looking to stretch your budget a little, the AirPods Pro is an excellent choice right now. It comes with active noise cancellation by default, while bringing all the awesome features of the standard AirPods. This product pretty much solves the one complaint that customers had about the AirPods.