Don’t let the hardcore members of the PC Master Race get under your skin: you can have plenty of FPS fun even without the mouse and keyboard combo. There are now more excellent First-Person Shooter Games for the iPhone and iPad than ever before, ranging from old-school shooters with simple gameplay mechanics to new-school combat simulations with both local and online multiplayer.

Not sure what the best first-person shooter is for the iPhone? Follow along with us below, and we’ll show you seven of our favorites. Let’s dive right in. 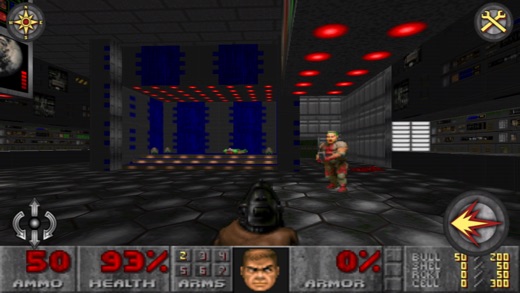 Being fans of the FPS genre, we feel an absolute obligation to start this list with the FPS game that has arguably helped to lay the foundations of the FPS genre as we know it today. DOOM Classic lets you rip and tear through the original three episodes as well as Episode Four, Thy Flesh Consumed, with the arsenal of such unforgettable weapons as the Chainsaw and the BFG 9000.

The game features three different control types, and it comes with the original soundtrack included. But if you’d like to feel like an ass-kicking, demon-killing machine while listening to your music, you can do that too. DOOM Classic is a paid title. Once you beat all the levels, you can get an extra dose of carnage by purchasing DOOM Resurrection. 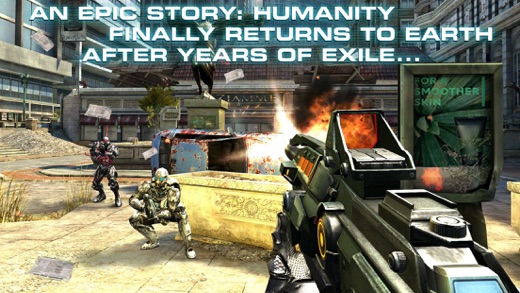 The N.O.V.A. series is as close as you get to the cinematic experience of Call of Duty on your iPhone or iPad, and we mean that in the best way possible. N.O.V.A. 3 takes everything that was great about the previous entries in the series (and there was a lot of it) and sprinkles a healthy dose of sci-fi action awesomeness all over it.

This time, your bullets help humanity finally return to Earth after years of exile as you fight in 10 immersive levels across the galaxy. If you prefer multi-player action to single-player story-driven combat, you can join 12-player battles in 7 multiplayer modes on 7 different maps. And for the first time in the N.O.V.A. series, you can jump inside the same vehicle with your buddies and use the voice time feature to catch the enemy unprepared. 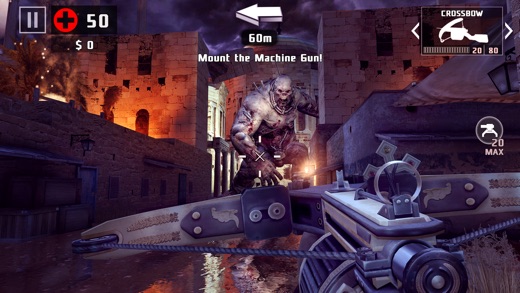 Do you have what it takes to survive a zombie apocalypse? Namely a disciplined trigger finger and the accuracy of an experienced combat veteran. Then you should join 50 million survivors from all over the world who are enjoying Dead Trigger 2 and its constantly evolving and expanding the content. The game takes you across 10 regions in different parts of the world, allowing you to explore 33 unique environments with 38 kinds of weapons at your disposal.

Dead Trigger 2 can be controlled either using an enhanced virtual joystick or using MOGA and other MFi game controllers. The graphics are among the best you’ll see on the iPhone or iPad, and the story isn’t bad either. But the game is mainly about the addictive zombie-slaying gameplay that is guaranteed to grab you from the very first headshot. 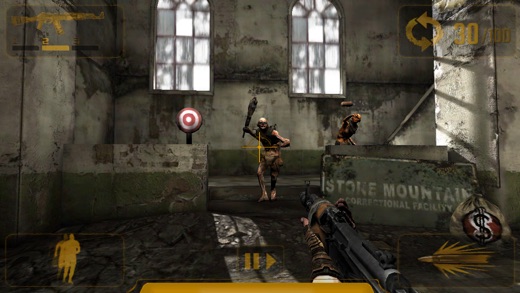 Rage was once one of the most anticipated games on the PC and consoles, and it’s now finally available to iPhone and iPad users as well, with higher resolution textures that are optimally viewed on a 4th generation device or the iPad. If you enjoy the post-apocalyptic setting of games like Fallout or Wasteland or Mad Max, you’ll love killing hungry mutants in Rage. Compared to the version for PC and consoles, Rage HD is considerably more limited in terms of gameplay mechanics. Still, the game has retained all the essentials: its breathtaking atmosphere and its stunning visuals.

Being a first-person rail shooter, Rage HD is much easier to control using virtual controls than FPS games that let you roam freely, and it’s also considerably less expensive than many other FPS titles for iOS. 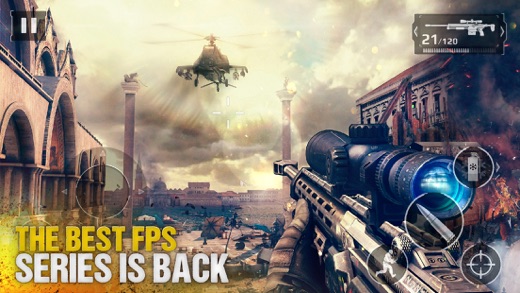 Single-player-oriented players can play through multiple missions with various challenges and enjoy the flawless graphics, music, and voice performances without worrying about being shot in the back and viciously teabagged.

And those who seek the thrill of multi-player combat can participate in epic team clashes in Squad vs. Squad matches or watch players in battle with the new Spectator mode. The best players can even win rewards and reach the very top of individual and squad leaderboards.

First-person shooter on the iPhone?

First-person shooters (FPS) do come with their drawbacks on the iPhone. The biggest one is that the on-screen controls are almost impossible to use. You certainly don’t get any precision shooting, which can leave you out of luck on the more competitive titles, especially when going multiplayer.

That’s why you might want also to consider picking up a controller to go along with one of this first-person shooter. With a game controller for the iPhone, you can take your wicked skills online, slaughter a majority of the competition, and end up as one of the top players on the leaderboards. Here are a few that work great with the iPhone: 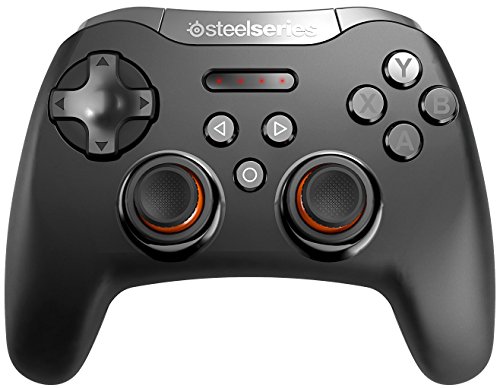 Our favorite controller yet is the SteelSeries Stratus XL. This controller is essentially your standard full-size Xbox One gaming controller, but for the mobile market. Bringing mainstream console ergonomics to the iPhone and other mobile devices, you’ll genuinely slaughter the completion with precision buttons and toggles.

You can easily connect this up to your iPhone or iPad over Bluetooth. Once you do, you can customize and program the sensitivity of the triggers and joysticks. It’s one of the few controllers out there that allow you to do this. 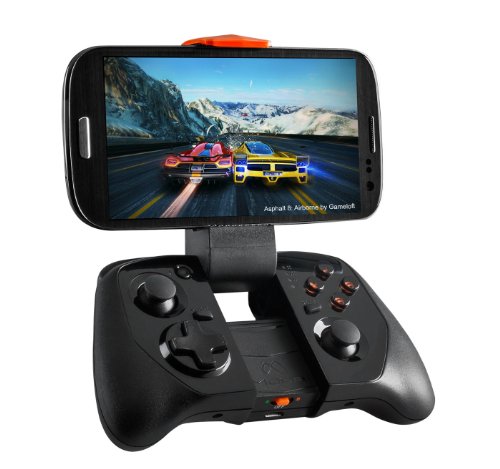 This one has a clip to keep your iPhone in place while you play; however, it certainly won’t fit an iPad. You can still connect up over Bluetooth, and use the controls as normal, though. However, using the iPhone with it, the Hero Power even allows you to charge your device while you play.

If you like casual and cartoon-like games, Blitz Brigade is an excellent first-person shooter for your iPhone or iPad. It’s primarily an online multiplayer game, so as you might imagine, two teams fight against each other. One represents evil and another good. That matters because each player or character on those teams possesses their unique abilities.

If you played Team Fortress on the PC at all, you might be familiar with Blitz Brigade. You can choose to play between a soldier, a spy, a medic, a machine gunner, or a sniper. 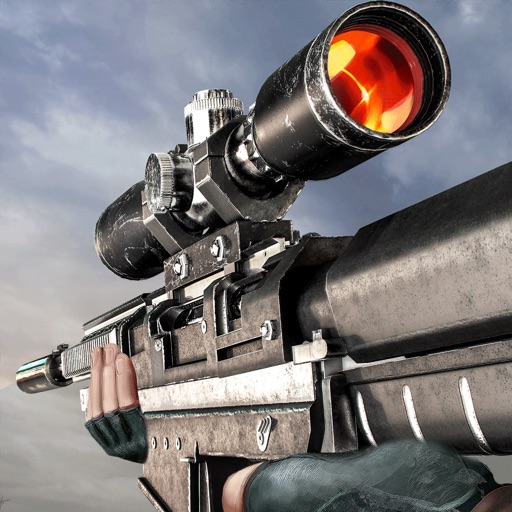 If you love shooters, Sniper 3D is an excellent choice that will keep you entertained for hours. This game has plenty of content to keep you pretty busy — there are a plethora of missions to run through. On top of that, Sniper 3D is regularly updated, brining new missions with those updates now and then.

Additionally, Sniper 3D has some excellent graphics and animations in it. It will look excellent on the iPhone and iPad; however, we think that these really “pop” on the iPad Pro in particular.

As you can see, there are a lot of great FPS games for the iPhone and iPad. These are all impressive titles, and the competitive side to them adds to the fun. That said, you can enhance your experience by picking up one of those controllers for the iPhone or iPad, as well.

Do you have a favorite FPS title or controller? Let us know in the comments below.